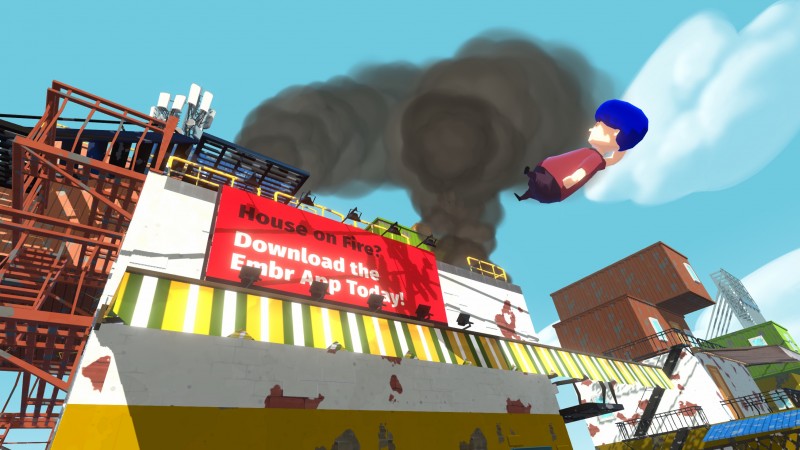 We live in a gig economy, where the rise of social networking and mobile computing has allowed companies like Uber, Lyft, and AirBnb to alter the way we conduct business. Inspired by this economic market, Muse Games has taken ride sharing to the next logical step: emergency services. Players who join the Embr Respondr crew assume the role of a contract firefighter tasked with battling fires, rescuing trapped civilians, and protecting their reputation from angry user reviews.

“As an Embr Respondr, you are responsible for saving people’s lives,” says director Matthew Niederberger. “When you open up your map on the Embr app, you’ll see you’ve got a couple calls – a couple houses on fire – and you can pick which one you want to respond to. You can battle these fires alone or you can team up with some friends and rescue people together.”

Rescuing civilians isn’t always easy, and every call features its own pitfalls. Fortunately, overcoming Embr’s environmental hazards often leads to goofy hijinks thanks to Embr’s system-driven mechanics. Civilians follow you toward safety, but you will need to carve a path for them. Do you push back the flames with your water hose? Do you use your axe to open a new exit on a nearby wall? Or do you use a ladder to create a shortcut to the ground?

Players choose how they overcome each obstacle and how they circumvent each challenge, but fire is like a wild creature and you don’t always know how it is going to act. When I took too long in one building, the fire ate through the floor and I fell into the basement, so I had to find another route outside. On another mission, I accidently knocked a civilian unconscious when I hit them with my water hose and I had to carry them to safety.

“We discovered early on while designing puzzles with one solution that if someone doesn’t get it, the game falls apart, so from a design perspective we stopped designing puzzles and started designing obstacles,” Niederberger says. “It’s kind of a philosophical piece of our design ethos these days. We just put things in players’ ways and give them lots of tools. They might come up with a more interesting way to get through them than we would.”

That toolset expands greatly as you use your firefighting earnings to purchase new equipment and vehicles directly from the Embr app. Most equipment can be upgraded several times. For example, water hoses have upgrades for greater water capacity and higher hose pressure, which makes it easier to push people and obstacles around. An auto refill upgrade means you won’t have to run back to your response vehicle in the middle of a mission. Another handy tool is the grappling hook, which can be used to pull people and other objects around the environment, and this can be upgraded to have a greater reach or to pull heavier objects.

Embr isn’t the only firefighting squad on the market, and during your rise to firefighting glory you might run into the competition. A Canadian firefighting startup called Hosr aims to bring socialized firefighting back to the United States. However, since you’ve signed a non-compete agreement with Embr, Hosr can’t hire you, which makes you their enemy.

“Every once in a while, you’ll get a call that seems a little suspicious, and it won’t be your usual rescue mission,” Niederberger says. “When you get one of these suspicious calls, you might end up trapped in a building, and you’ll have to use your knowledge of firefighting to escape any way you can. These missions will be a little more puzzle oriented. There’ll be some mechanics that you have to learn a little more deeply, so you might need to spray water on an electrical outlet where the wires have been cut to open a door, for example.”

Embr is goofy and full of oddball antics, but it also offers an interesting commentary on the perils of working as a contract laborer. Muse Games aims to unleash Embr early next year on PC, and is currently exploring console options. It might not set the world on fire, but we can’t wait to play more.

Microsoft Teams will be built directly into Windows 11

Symantec’s Sheila Jordan named to Slack’s board of directors

ThredUp, whose second-hand goods will start appearing at Macy’s and JCPenney, just raised a bundle