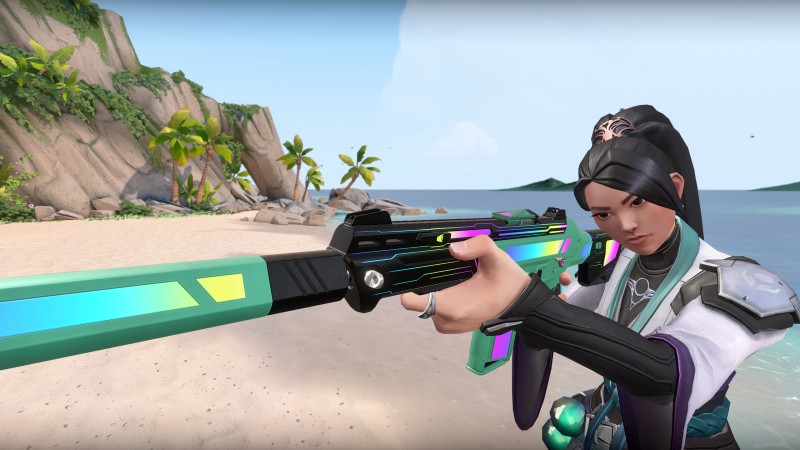 Valorant is an innovative mix of CS: GO’s tight FPS mechanics and Overwatch’s infectious character design. Riot’s competitive shooter has found a lot of success since its release and its impressive amount of post-launch content is indicative of this. Episode 2, Act 3 is slated to continue this tradition by introducing a new map, a new battle pass with noteworthy upgrades, and a new skinline for a bevy of different weapons.

The latest arena, Breeze, is a gorgeous, tropical island located in the southern part of the Bermuda Triangle. This time around, Riot focused on creating a balance between wider chokepoints and geographical features that prioritize long range engagements. Valorant’s loop has always emphasized mechanical skill and weapon accuracy; Breeze will likely put your aim and positioning knowhow to the test. You can scroll through the gallery above to get a better understanding of Breeze’s structure.

A new battle pass is dropping with cool gun skins, radianite points, gun buddies, cards, sprays, and titles. Producer Preeti Khanolkar spoke about the concepts that the team wanted to convey with the new unlockable content as well as the importance of collectible cards in the battle pass, “There are so many hidden stories within these cards, so we hope that players will pay close attention and dissect every detail to uncover all the mysteries inside them.” Check out a handful of the cool content that awaits in the battle pass gallery.

Finally, Valorant is getting a new skinline that you’ll be able to equip onto your favorite firearms and melee weapons. Called Forsaken, the skinline comes with exclusive visual effects, audio, variants, kill banners, and finishers. You’ll be able to tweak your equipment even more with a custom ADS reticle and VFX effects (among many other cool features) as you climb the Forsaken skinline levels.

Valorant Episode 2, Act 3 drops next week on April 27. The battle pass will last until June 21.

Are you looking forward to the new map and the other content coming to the game? Let us know in the comments.

The Telltale Batman Shadows Edition is Available Now on Xbox One