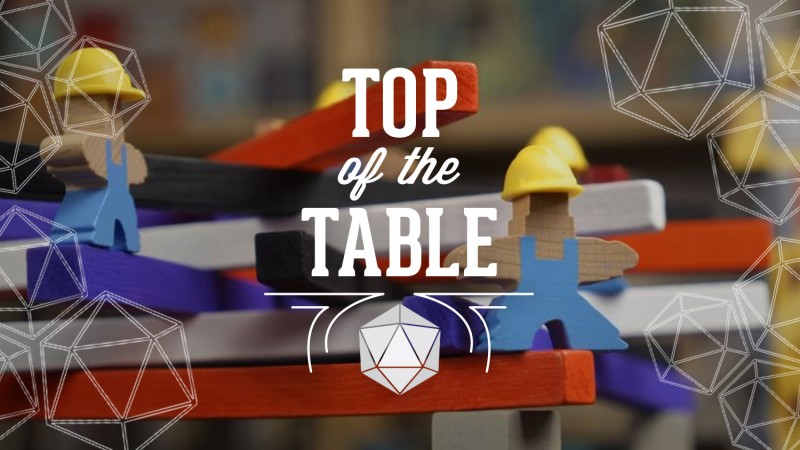 The holiday gifting season is fast upon us, and many of us have kids in our family or friend groups who are hoping for something fun wrapped up to enjoy. Beyond gift-giving, if you’ve got a family of your own, you may be trying to come up with ways to keep yourself and the kids entertained over the holiday break from school. Either way, I can say with confidence that a good family board game is worth its weight in gold, both for keeping everyone happily entertained, but also ensuring some fun shared activities to make memories.

The board gaming hobby has no shortage of wonderful family games, but I’ve kept the focus here on mostly newer projects that you may not have heard of. As you consider which game might be right for your family group, make sure and check against the age recommendations listed, and zero in on something that all participants can enjoy, no matter how long they’ve been gaming. 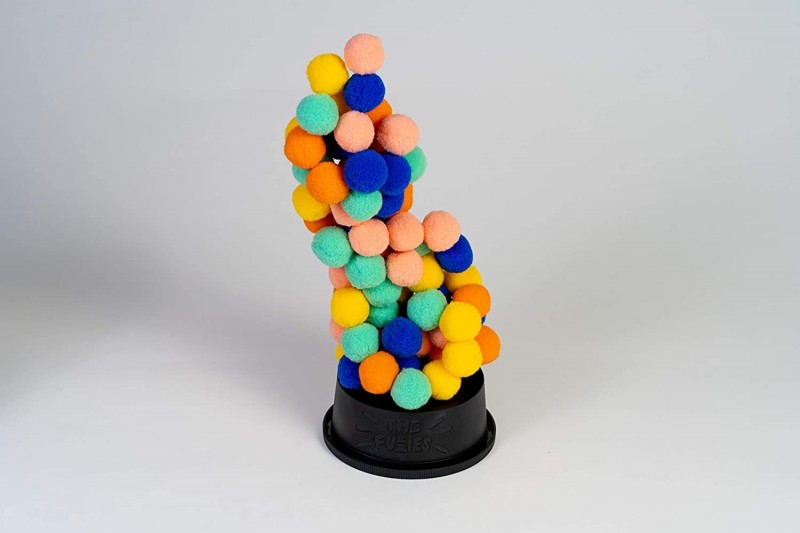 Looking to introduce the kids to their first dexterity game? Fuzzies is a wonderful twist on the stacking/pulling tower concept, but with a far lower threshold for angrily thrown wooden blocks than in a game like Jenga. Instead of blocks, Fuzzies features a tower of small fuzzy multi-colored balls. After packing them into an included tall cup, they can be stacked onto a base, and the cup removed, leaving a perfectly formed (and sort of adorable) mass of clumped-up color. Players use tweezers, or just their fingers, to remove a ball and place it back atop the tower. Knock some balls off, and you get a silly challenge on your next go, like having to use your non-dominant hand. This one is simple, fast, and if you strip out the card challenges, can be played with kids even younger. Just be prepared to spend a few minutes at the end of your play session gathering errant fuzzies – they’re sneaky little guys. 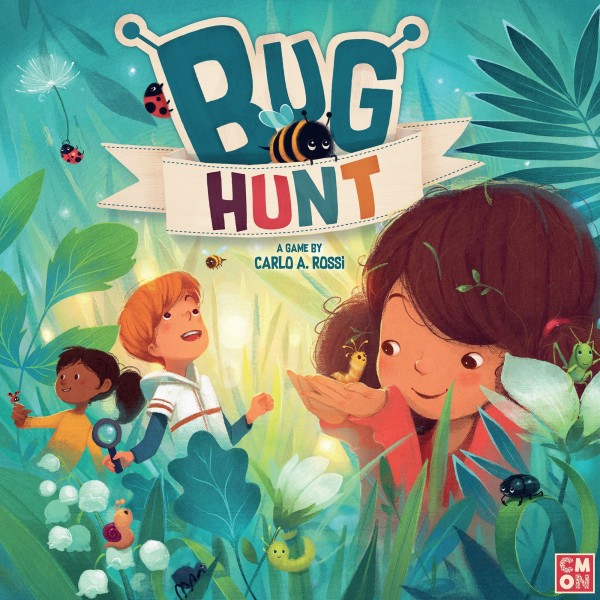 This simple memory and sensory game is a lovely change of pace from the norm. While it’s not likely to keep older players entertained for too long, it’s just the ticket if you have a busy group of younger kids looking for something new. Players each have a color of bug that they’re trying to collect, and each bug has its own unique shaped piece. Players peek inside the “shrub” where they’re hiding, and try to memorize where their colored bugs are lying. Afterward, you can’t see the bugs as you reach through a blind shield and try to pull out the correct options by feel. If you accidentally catch your opponents’ bugs, you’re just helping them win faster. Plus, there are little white bugs that “bite.” If you manage to pick up three of those, you’re out. No one should pretend that Bug Hunt is a complex or strategic game, but it does have a unique mechanic that I haven’t seen before, and kids I’ve played with enjoy the surprise of reaching in and trying to grab the right piece. 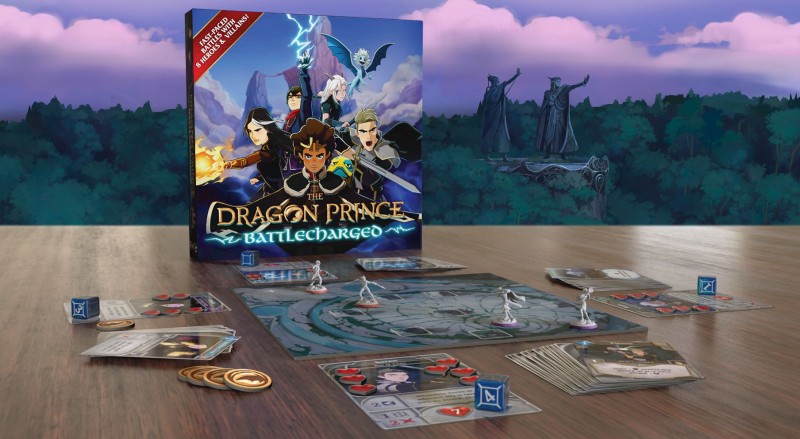 If you’ve got older kids at home, there’s a good chance you already know about the excellent animated series called Dragon Prince, currently streaming on Netflix. If not, go watch that right now, and come back. I’ll wait… Alright, back now? Wasn’t that great? Fortunately for fans, you can continue the adventures of Callum, Rayla, and their friends with this rewarding tactical miniature game. Each character has their own small deck of cards that lets them bring unique abilities into the fray during the skirmish. Players face off in battle, and the fun comes from seeing the ways each character clashes against the others. Battlecharged is by no means the most sophisticated miniature skirmish game on the market, and don’t go in expecting an extension of the show’s story, as this is purely about the battles. But veteran game maker Brotherwise has made conscious choices to keep things accessible for players new to tactical encounters, and the multiple battlemaps that are included keep things engaging on replay. 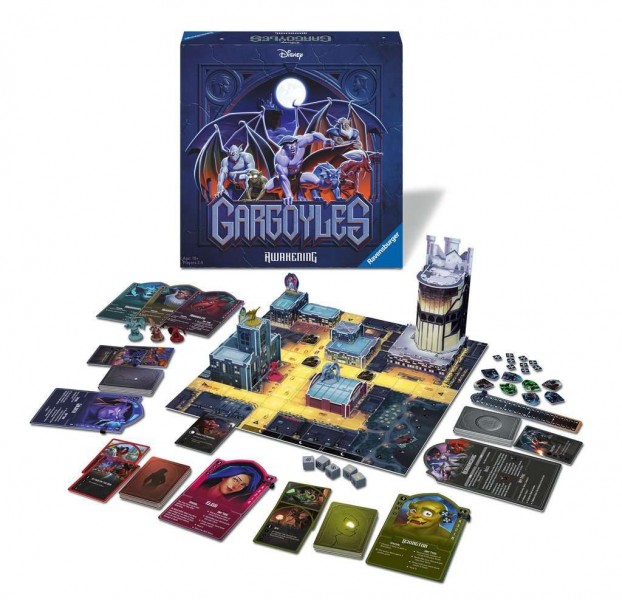 I’ve always considered Gargoyles one of the hidden gems of the Disney catalog. The dark themes and Gothic styling of that ‘90s animated show were a striking departure from the normal Disney fare. And the voice cast, which included some genuine acting heavyweights, helped the dialogue to pop. I’m clearly not the only fan, as Ravensburger has released this engaging battle game, in which players take on the role of the titular gargoyles as they battle the forces of Xanatos and Demona. One of the coolest features of the game is the 3D board, which sees your minis moving between the rooftops of Manhattan. The game includes four distinct scenarios, each of which offers a different style of play. Three of those happen to be cooperative, while the last provides a more competitive experience. No matter the storyline you play out, the high production values and smart combat and objectives ensure an enjoyable session. If sharing with kids who don’t know the property, I recommend taking a part of the holiday season to watch some of the show (it’s on DVD, but it’s also on Disney+ if you have that streaming option), and then use that as a catapult into a fun game night. 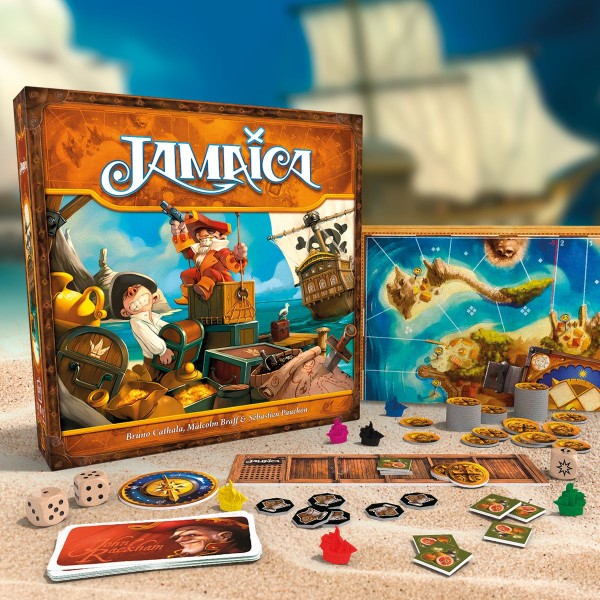 Jamaica is one of my hands-down favorite gateway games into thematic board gaming. Originally released back in 2007, this new edition changes very little (mostly a streamlined approach to learning the rules), but offers a new chance to snag a game that has been a surefire hit for more than a few families I know. Jamaica is both a racing game, and a game of acquisition, as each player controls a pirate ship as it zips around the island, collecting treasure, firing off cannons, and hopefully keeping your crew fed along the way. The game plays fast and easy, but is far more interesting and strategic than many “roll-and-move” family games. If your crew has a few pirate fans in the mix, this is an approachable and fun game they’ll adore, and I promise the older buccaneers will have a good time as well. 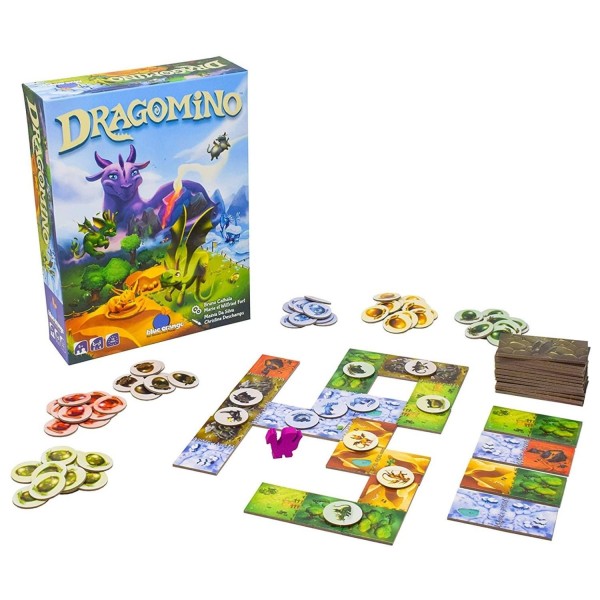 The stellar Kingdomino released in 2016 to well-deserved critical acclaim. In fact, if your kids are just a bit older, that’s still a top recommendation. That original territory-capturing game offers a clever twist on Dominoes, but with some additional strategic complexity, and the added fun of a kingdom expansion theme. The game’s newer cousin, Dragomino, aims to make things even simpler as a welcome into this style of play. Players adopt the role of dragon trainers who must try to collect the most dragon eggs, and do so by linking together similarly colored territories. Dragomino’s gameplay is very similar to its older cousin, but features simplified scoring, no constraints on grid size (a big and challenging limit in the original), and art and colors that are simply more inviting. In short, stick with the original for yourself or for your older kids. But if you’re looking for a genuine strategy experience that even the Kindergartener in your family can pick up, this will be perfect. 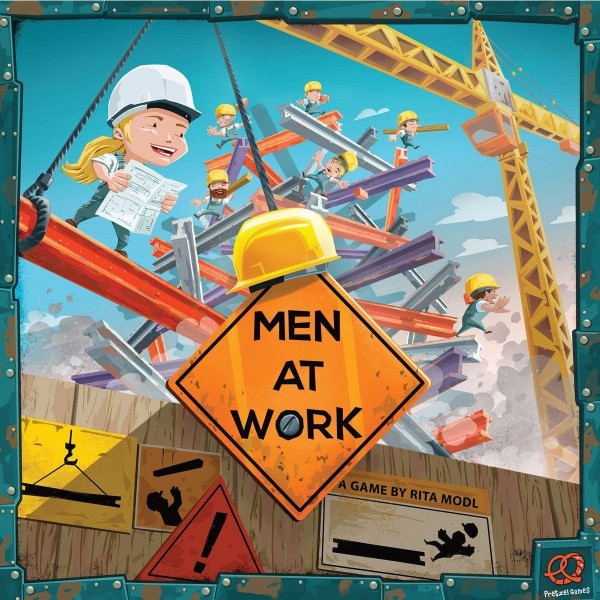 This dexterity game challenges players to build a construction site, and attempt to avoid seemingly inevitable accidents. Tiny meeple construction workers mount the girders as the game plays out, creating increasingly precarious table tableaus that are amusing to look at, and doomed for collapse. Players take turns drawing cards, which dictate what piece to add to the site and specific instructions on how to do so. Knock something over, and you lose one of your safety certificates. Eventually, the bosslady shows up, and you also can try to compete to be the employee of the month. It’s a fun and surprisingly challenging stacking challenge. There are enough rules to make things a bit complicated for the youngest players, but most families will be delighted by the sturdy and colorful components and the hilariously poorly designed structures that emerge in each game session. 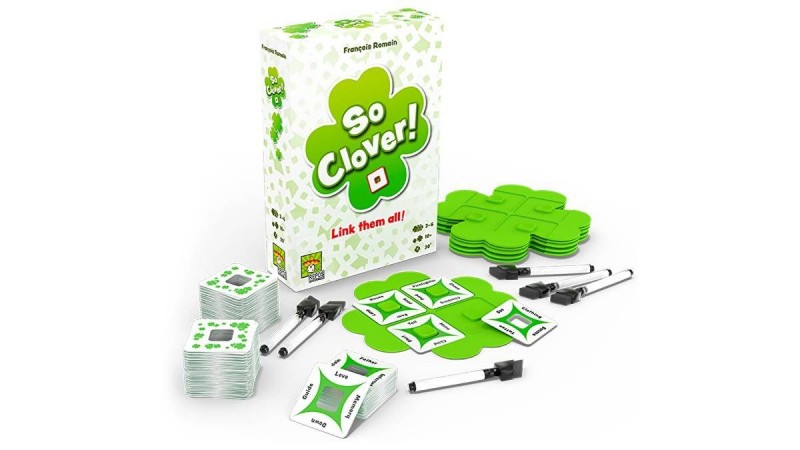 Repos has some of my favorite party games in its catalog, including games I’ve previously recommended like Just One, Ca$h ‘n Guns, and Concept. So Clover is another memorable release from the studio and ideal for family get-togethers. Players receive a random assortment of cards with words on them, like “Banana,” “Shirt,” and “Firefighter.” You must write down keywords that link particular pairs of words. For instance, you might come up with the keyword of “Wool” to link “Sheep” and “Clothing.” Players then work together to try to guess the keywords. So Clover is cooperative, which helps keep things civil if one or more of the kids can get carried away with competitive games. The word association gameplay is simple and enjoyable, but of course, this one is only the right choice if everyone at the table is fully comfortable with reading and writing. If your gaming team has crossed that milestone, expect a good time. 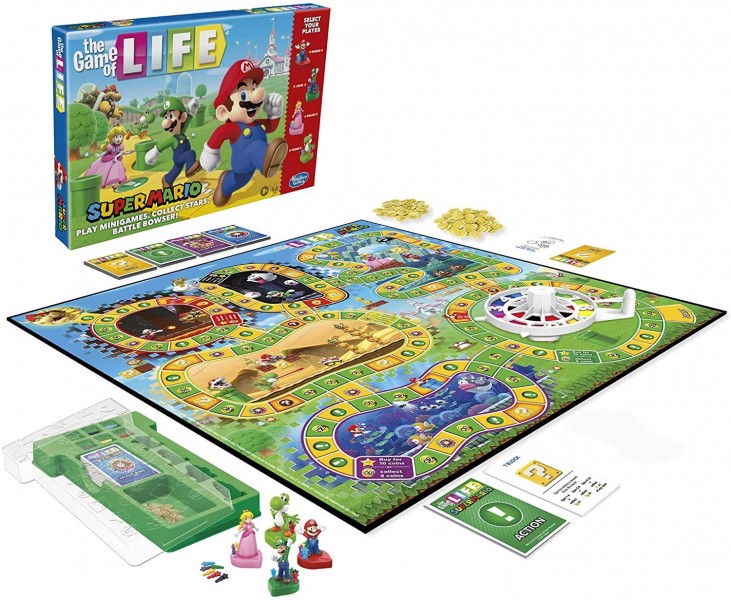 Before I ever got into the more involved and thematic hobby board game scene, the old Game of Life board game was a popular fixture of my childhood. In my experience, it’s rare that licensed spin-offs of old classic board games add much to the mix. But I was pleasantly surprised by the Super Mario Edition of Life, which maintains much of the fun (the spinner, looping track, fun spaces) but adds enough Mario vibes to feel fresh. Instead of trying to make the most money and retire, players are instead trying to race to the finish and take out Bowser. Along the way, players encounter lots of fun spaces for power-ups and the like, as well as some spaces that demand brief minigames that you play with other folks at the table. In addition, you’re trying to boost your chances of a win against the big guy by collecting stars, which add to your final spin as you try to hit the numerical win threshold. While I’ll always have a special place in my heart for the original game, I think the Mario theming here is honestly more appealing for most families than a story about collecting more money than your fellows. Don’t go in expecting complex gameplay, and I think this one hits a nice balance between nostalgia and modern fun. 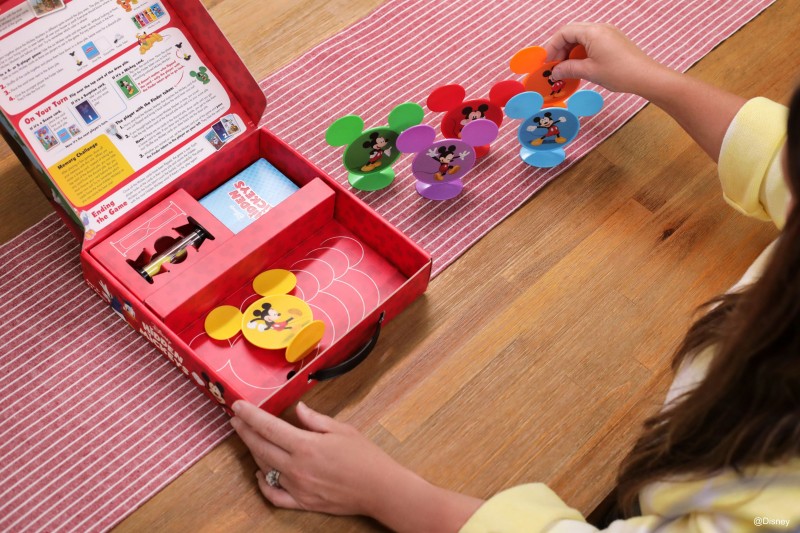 If your little ones are still especially young, I recommend this amusing game of hide and seek, in which players flip over cards with images of the iconic mouse, and then race around the house or yard to find the matching picture. After the markers are found, you’re also trying to spy out hidden mickey symbols on the cards themselves to score points. I like the way this game takes into account the likely behaviors of very young children, encouraging them to get up out of their seats and race around to find hidden items. But there’s also a focused component of play, where they need to slow down and look carefully at the cards. For Disneyphile families with young players, I suspect you’ll find this little gem gets a lot of requests for repeat play.

I hope one or more of the above games helps to brighten your family’s holiday season. If you still aren’t seeing anything that’s the right fit, don’t hesitate to drop me a line, and I’ll be happy to help you figure out an option. If you’re looking for great family video games this season, don’t miss our recent round-up. And if you’re looking for some more grown-up tabletop fare, you’ll find plenty of recommendations in our Top of the Table hub, which you can reach from the banner below.

So, you want to democratize venture capital