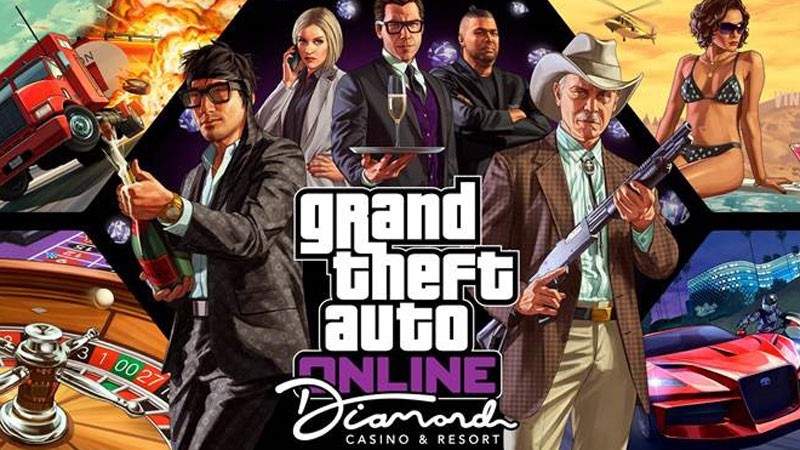 Petrochemical magnates have taken ownership of Diamond Casino and Resort away from Tao Cheng and the Triads – and the Cheng family is not happy. Georgina Cheng, VP of Cheng Holdings, has enlisted lovable hacker Lester Crest and the rest of his crew, including a rapper named Yung Ancestor (played by Danny Brown), to get revenge. With these eccentric characters as teammates, players will infiltrate the casino, break into the vault, and steal all its contents.

Unlike, prior heists this one adapts to your actions and allows for improvisation no matter what happens. This means there is no failure unless you die.

Like the single-player story missions, this new heist gives online players options on how to approach the robbery. After registering as a VIP/CEO/MC President and purchasing an Arcade (via the Maze Bank Foreclosure website), players can begin planning the heist through setup missions.

Setup missions focus on information gathering, either alone or cooperatively, so the player can make an informed decision on which approach to take.

After planning for the heist, players will have to prepare for it by doing a few “Heist Prep Missions.” These missions allow players to choose which equipment and personal they take along for the heist. Depending on the chosen approach the personal and equipment will vary. For instance, if players choose the “Big Con” option, they might get Fire Dept uniforms to gain access to the vault.

With all the prep work completed players can initiate the heist and invite up to three other players to join them (at least two players must participate in each heist).

With everything in check, the robbery, either violent or non-lethal, will play out.

The arcade, a new addition in this update, offers more than just initiating the Diamond Casino Heist: It’s a fully functional arcade. Players can buy new décor styles, arcade cabinets, and games to play. Just like Nightclubs, players can enjoy one another’s arcades.
Here are all available arcade titles:

Other activities within the Arcade include:

A new radio station, iFruit Radio has been added to the game, hosted by rapper Danny Brown and featuring British MC and Producer Skepta.