Beatrice Fihn is the executive director of the International Campaign to Abolish Nuclear Weapons and the winner of the 2017 Nobel Peace Prize.

“Atomic bombs are primarily a means for the ruthless annihilation of cities.”

Those are the words of Leo Szilard, one of the scientists who pushed for the development of nuclear weapons. He wrote them as part of a petition signed by dozens of other scientists who had worked on the Manhattan Project pleading with President Harry Truman not to use the nuclear bomb on Japan.

Mere months after its introduction in 1945, the architects of today’s nuclear world feared the implications of the technology they had created.

Nearly 75 years later it’s time again to ask technologists, innovators, entrepreneurs and academics: will you be party to the ‘ruthless annihilation of cities’? Will you expend your talents in the service of nuclear weapons? Will you use technology to create or to destroy?

Our moment of choice

Humanity is at another turning point.

A new nuclear arms race has begun in earnest with the US and Russia leading the way; tearing up the promise of lasting peace in favor of a new Cold War. Russia’s latest weapon is built to destroy entire coast lines with a radioactive tsunami. The US is building new nuclear weapons that are ‘more likely to be used’.

Meanwhile, North Korea appears to again be building its nascent nuclear weapons program. And India and Pakistan stand on the verge of open nuclear conflict, which climate modeling shows could lead to a global famine killing upwards of 2 billion people. 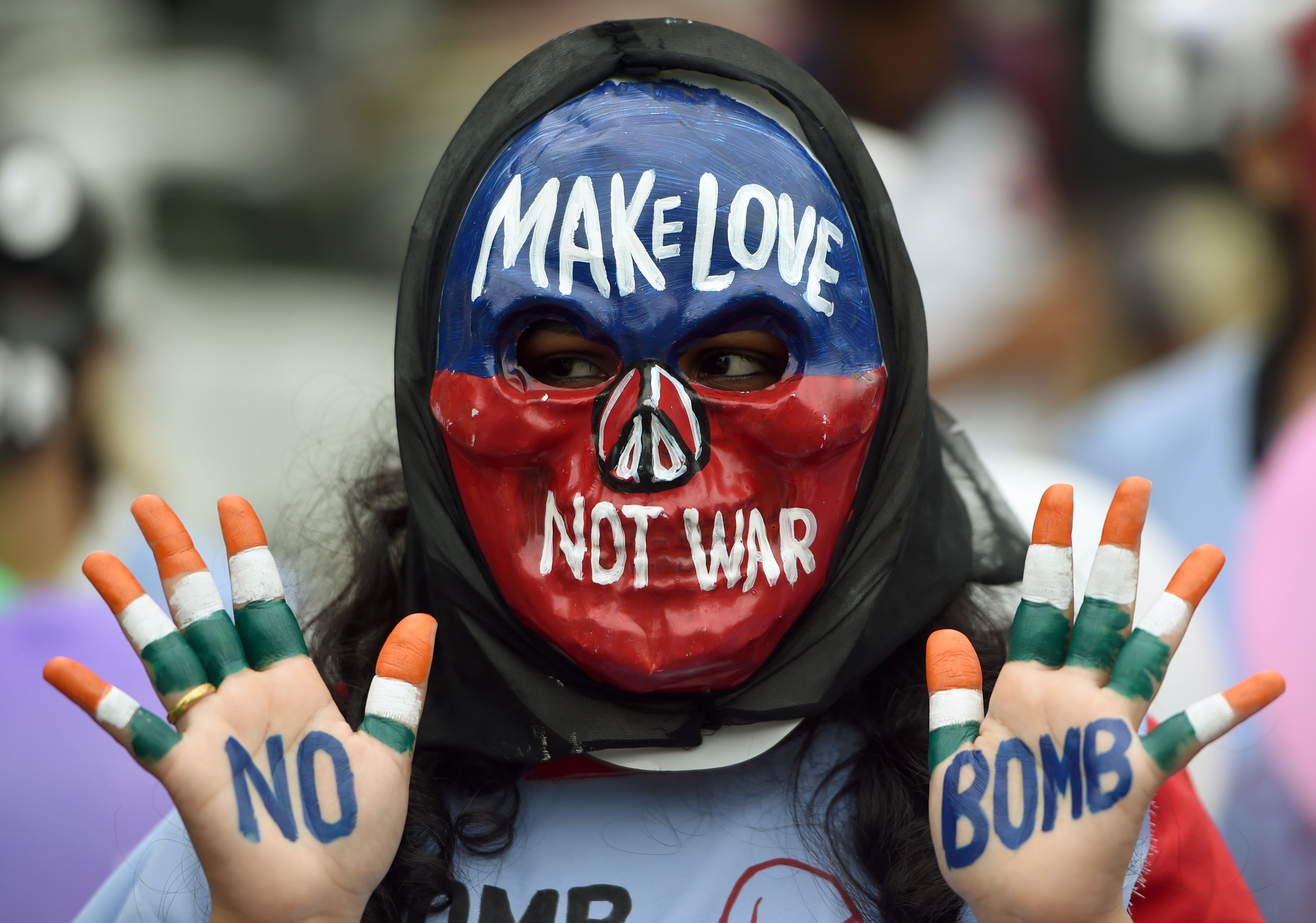 An Indian student wearing a mask poses with her hands painted with a slogans for peace during a rally to mark Hiroshima Day, in Mumbai on August 6, 2018. (PUNIT PARANJPE/AFP/Getty Images)

How do we stop this march toward oblivion?

The Treaty on the Prohibition of Nuclear Weapons has created an opening — a chance to radically change course with the power of international law and shifting norms. The nuclear ban treaty will become international law once 50 nations have ratified it. We are already at 22.

The financial world is also recognizing the risk, with some of the world’s biggest pension funds divesting from nuclear weapons. But there is something even more powerful than the almighty dollar; human capital.

“It took innovation, technological disruption, and ingenuity to create the nuclear dawn. We will need those same forces in greater measure to bring about a nuclear dusk.”

The nuclear weapons industrial complex relies on the most talented scientists, engineers, physicists and technologists to build this deadly arsenal. As more of that talent moves into the tech sector, defense contractors and the Pentagon is seeking to work with major technology companies and disruptive startups, as well as continue their work with universities.

Without those talented technologists, there would be no new nuclear arms race. It’s time to divest human capital from nuclear weapons.

A mistake to end humanity?

Just over one year ago Hawaiians took cover and frantically Googled, “What to do during a nuclear attack”. Days later many Japanese mobile phone users also received a false alert for an inbound nuclear missile.

The combination of human error and technological flaws these incidents exposed makes accidental nuclear attacks an inevitability if we don’t move to end nuclear weapons before they end us.

The development of new machine learning technologies, autonomous weapons systems, cyber threats and social media manipulation are already destabilizing the global political order and potentially increasing the risk of a nuclear cataclysm. That is why it’s vital that the technology community collectively commits to using their skills and knowledge to protect us from nuclear eradication by joining the effort for global nuclear abolition. 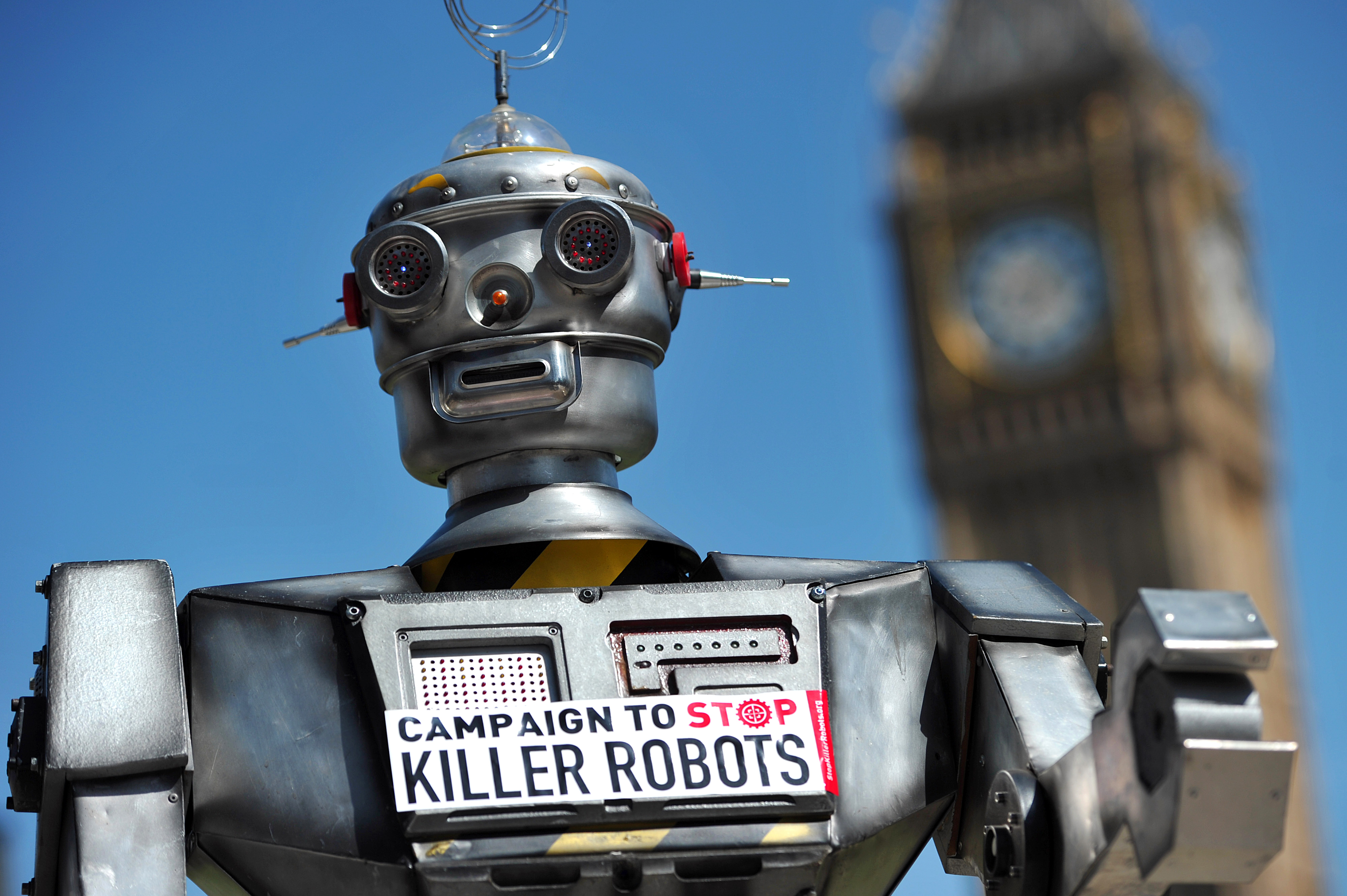 A mock “killer robot” is pictured in central London on April 23, 2013 during the launching of the Campaign to Stop “Killer Robots,” which calls for the ban of lethal robot weapons that would be able to select and attack targets without any human intervention. The Campaign to Stop Killer Robots calls for a pre-emptive and comprehensive ban on the development, production, and use of fully autonomous weapons. (Photo: CARL COURT/AFP/Getty Images)

We need to stop this foolish nuclear escalation in its tracks. Our commitment must be to a nuclear weapons-free world, by disrupting the trajectory we are currently heading on. Business as usual will likely end in nuclear war.

It took innovation, technological disruption, and ingenuity to create the nuclear dawn. We will need those same forces in greater measure to bring about a nuclear dusk — the complete disarmament of nuclear-armed states and safeguards against future proliferation.

The belief that we can keep doing what we have done for seven decades for another seven decades is naive. It relies on a fanciful, misplaced faith in the illogical idea of deterrence. We are told simultaneously that nuclear weapons keep the world safe, by never being used. They bestow power, but only make certain states powerful.

This fallacy has been exposed by this moment in time. Thirty years after the end of the Cold War, nuclear weapons have proliferated. Key treaties have been torn up or are under threat. And even more states are threatening to develop nuclear weapons.

Foreclosed Looks Like A Cyberpunk Comic Book Game, And It Comes To Switch This Summer

Anyone can now create maps and stories on Google Earth

Cortana wants to be your personal executive assistant and read your emails to you, too

Colorcon, which develops colorants, coatings, and films for pharmaceutical giants, has a new $50 million fund